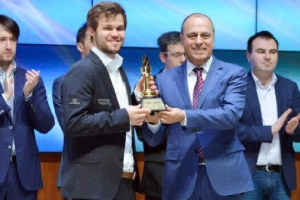 Having already secured victory yesterday, Magnus Carlsen finished the Gashimov Memorial in style. On Tuesday he defeated Alexander Grischuk to finish two points ahead of the pack, something the chess world hadn't seen for 4.5 years.

Carlsen did go for it, and his fighting spirit was rewarded with a third win in a row. He finished on 7/9, the most dominating victory since Fabiano Caruana's win at the 2014 Sinquefield Cup. At the closing ceremony, Carlsen called it one of the best tournaments he had ever played "both in terms of performance and also of quality of the games."

Today's tournament achievement, 12 points shy of a 3000 performance rating, evoked superlative reactions from some of Carlsen's colleagues in Shamkir. Grischuk was impressed by his opponent's play. | Photo: Shamkir Chess.

He is now 44 points ahead of number-two Caruana. The difference between Carlsen and the rest of the world that hasn't been this high since September 2016 (when Maxime Vachier-Lagrave was world number-two, also 44 points behind). Read more...