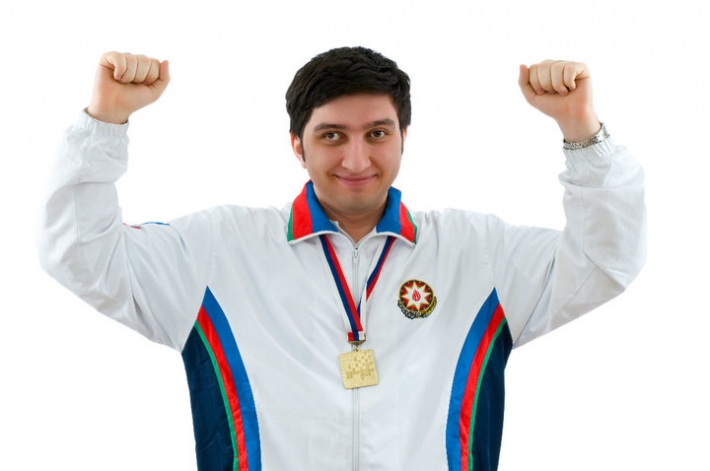 I returned to gain the victory!

"I returned to gain the victory", the Azerbaijani grand master Vugar Hashimov said with a smile after his great victory on the 1st stage of the Baku 2008 Grand Prize which was held first time in the International Chess History. This great sound delight was not only about striking victory in chess, but also the triumph over the illness. After all, Vugar Hashimov was diagnosed medically in his childhood and was determined: There would not be any severe mental tension and chess contest.

Even that time – regardless of anything – the highly talented, yet still too young chess player made a descision to challenge with his life, telling words that have turned to be the motto of his short and more apparent life: "I do not imagine my life without a chess".

The name Vugar means Pride in the Azerbaijani language. He was the pride of the World and Azerbaijnai Chess, indeed.

Vugar Gasim Hashimov was born on July 24th, 1986 in Baku. He started to learn chess when he was 6 years old. "The willing to gain a victory comes from my father. He was a great fan of the board games. He had some winnings in the USSR Championship, particularly in chess organized among militants" – said, Vugar remembers.

Vugar was three-time national winner in the age groups: in 1995, 1996, and 1998 years. At the same time, he gained a vice-champion title four times  between 1996-2000 years in the European Championship among teenagers.

He was the youngest international chess master in the World in 1998.

Vugar Hashimov made his name known when he won the great “Kasparov Cup” held among teenagers in Moscow, in 1999. That time Vugar was 13 years old. Most of his opponents were older than him about 2-3 years. That was a great advantage in the teenager time. The 13th World Champion made compliments for his play. He called Hashimov a correct standing chess player who has a perfect tactical move.

Soon it was known that, the teenager is seriously ill. Unfortunately, due to his serious health problems, Vugar had to leave off chess for a long time. Vugar had been operated in his brain several times. For a while, the illness drew back. The strong will power, ambition to play again and win made Vugar turn to the Chess World once again.

His return in 2005 was victorious. He defeated the Acropol Open, being strong in terms of the staff, in Athens. He won with his prominent team, defeating 19 grand masters in Abu-Dhabi, in 2006.

Vugar was playing much and with a great pleasure replacing the gone time. He attended to the team championships organized in various countries, gained the championship in the Croatian, Turkish, Romanian, Iranian, Spanish, and Moldavian clubs. He was the winner of the Cappelle Grand Open Tournament held in France, in February 2008.

April of the same year, the 1st stage of the FİDE Grand Prize, holding the first time in Baku, was organized. Vugar won Carlsen and Van Xao passing ahead of them in terms of additional indicators. Soon, the rating of Vugar Hashimov passed 2750, and he was included to the top 10 maintaing the 6th place in the score table.

Once he was asked that, Vugar, could you please tell which part do you think utmost best? Which move do you remember in your experience?”. He answers: “Good ones are a lot; the move would be probably `Corel e6! ` Thanks to this move, Azerbaijan won the European Championship first time in the team history.” The first victory of the Azerbaijani National Team in the European Championship on team chess, organized in Novi Sad in 2009, is related exactly to the Vugar Hashimov`s name. In the last stage, defeating only the Netherlands National Team would be profitable. However, 3 out of 4 parts were draw. Vugar was practically in a draw position with the Dutch Daniel Stellvagen. Nevertheless, our prominent grand master could successfully change his position to win, and he won the first gold medal of the Azerbaijani history.

Next several years were the evidence that, Vugar is able to compete equally and defeat the strongest chess players in the world. He shared the first stage with Poykovskiy and was in the fourth place in The Grand Prize hold in Elista, and he was in the third place in Gibraltar Grand Prize. He went twice through to the ¼ final successively in the World Cup organized in Hanti Mansijsk in 2009 and 2011. He gained the perfect victory in the tournament of the Reggio Emila.

Vugar went to the next European Team Championship held in Greece in order to maintain the European Championship titles, within the Azerbaijani National Team in 2011. In a game against France, suddenly, Vugar got high pressured, and he could not continue the game. According to the agreement between two teams, the draw in the game had been reported. Nonetheless, the main point was the health of Hashimov. The Capitan if the team, Tukmakov did not want to allow Vugar to participate in the upcoming games. However, he heard this kind answer of Vugar: “No, what are you talking about?! I will play till the end!” Vugar felt himself normal to complete the tournament till the end, and he won more two games. Ultimately, our National Team won the silver medal. Hence, thanks to his professionality and strong will power, Azerbaijan marked its name permanently and indelible to the World Chess History.

Vugar was the silver and bronze medal holder in the Rapid and Blitz forms of Chess, with performing well in the Intellectual Games held in Beijing, in 2011. He played last time in the tournament held in Wijk Aan Zee, in 2012. After all these tournaments, Hashimov terminated his participating in the games, and he commenced to continue his treatment.

The Young Azerbaijani National Team would be the gold winner, if we are going to take into consideration of the rating, claims and opinions of the participants during the International Chess Olympic held in 2012. All the people were expecting to see Vugar come back. Unfortunately, it has not happened.

His partners, participating in the Azerbaijani National Team won the second time European Team Championship in 2013, and they devoted this victory to Vugar Hashimov.

The World Chess faced with a big and painful loss on January 11th, 2014. Vugar passed away in the hospital of Heidelberg city, Germany. Thousands of people, citizens came to see off him last time. Vugar Hashimov was consigned with a deep respectfulness to the 3rd Honorary Alley in Baku.

Vugar Hashimov lived only 27 years. Even if, he succeeded to perform his keen talent to chess and achieve great victories during his not too long life. Vugar was sensible, frank, genius, and having sophisticated education friend and friend. He is memorized as a silent boy having strong nerves by his fans, experts, and partners, as well. Exactly this character of Vugar helped him to be successful in this ancient game.

The Chess Academy named after Vugar Hashimov was opened ceremonially on October 1st, 2016.

Azerbaijani always commemorate his hero. “The Memorial of Vugar Hashimov” has been holding with participation of the world leading grand masters in Shamkir since 2014.