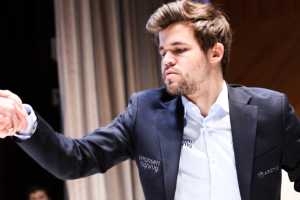 Round 7 of the Vugar Gashimov Memorial reported by Eteri Kublashvili

Round seven of the Vugar Gashimov Memorial has again given us a sole leader.

Playing White, Magnus Carlsen outplayed Anish Giri in the English Opening. The world champion launched a kingside offensive, and his plan worked out well for him. Carlsen said at the press conference that taking the pawn was a must as otherwise White goes ahead with his offensive and Black has nothing to say about it. However, the engine shows 18…Kh7!, intending g6 and f5.

The engine dislikes this move, preferring 19…f6 instead.

White is simply gathering his forces near the opponent’s king. Here Magnus refrained from forcing the matters with 26. Rxg6 in favor of the queen’s retreat to h3.

Anish was blitzing his moves with only seconds on his clock, overstepping the time limit in a hopeless position down an exchange.

Anand – Grischuk ended in a draw in the Anti-Berlin. Move 15 saw the Russian GM sidestepping from Sethuraman – Giri (2018), in which Black was fighting back from a much inferior position. White's snapping one of Black's doubled pawns made no difference as it was a draw in view of bishops of opposite color. A draw by repetition was agreed after Black's move 32.

David Navara and Sergey Karjakin ended up in one of the Catalan’s sidelines via transposition of moves.  The Czech GM could have posed more problems for his opponent, but opted for a calmer continuation and found himself down a pawn shortly after. Nevertheless, drawish tendencies prevailed and the game ended peacefully.

A sharp game in the Scotch Opening was seen between Teimour Radjabov and Veselin Topalov. The Azeri GM shared about being unfamiliar with 10…g6 here (although he himself characterized the setup as giving rise to many similar lines), at which point he started improvising. Not on the lookout for the Scotch Opening, Veselin Topalov was lucky in that he had the line checked going into the game with Leinier Dominguez in St. Louis. Black did not castle but led his king to c8, dropping the a-pawn along the way. White could have posed more problems after the trade of queens, but went for a forced line involving the trades, making a draw the most logical outcome.

Mamedyarov – Ding Liren was a relatively calm fight in one of the Queen’s Gambit sidelines. The middlegame transposed into an unorthodox ending with the white knight opposed by the black bishop. The trade of minors required calculation precision from both sides. The opponents’ performance was faultless as they queened their pawns, retaining equality. Despite Black's up a pawn superiority, the position remained a draw all along, which was signed after Black's move 54.

Tournament standings after round 7:

Pairings of round eight: